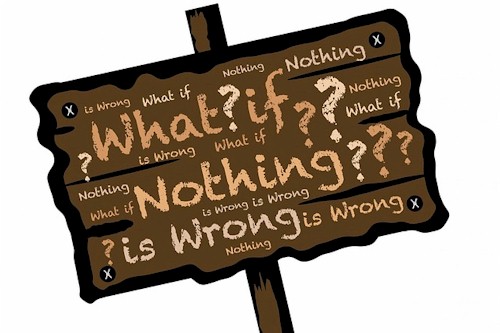 I’ve spent so many years seeking answers now it’s not even funny.

I was raised a Christian.

“Gave my heart to Jesus” at six years old.

Chose by myself at age ten to be baptised too.

So I have a bit of history with this stuff.

But as I came into my mid teens I realized this wasn’t enough. I realized I mostly believed because my parents raised me to think this was true.

It was time to decide for myself.

So I began to study philosophy and the evidences for faith.

I felt the arguments I was given were sound.

Then it happened. I ran into “them.” The people who didn’t have any vested interest in supporting my beliefs.

People who positively disbelieved them.

And I found they had some pretty good points too.

Enough good points that my belief began to falter.

Not completely disintegrate mind you.

I felt there was a a lot of good evidence that Christianity might be true but also evidence it just might not be.

As long as there were reasons.

To believe it could be false.

it was very hard to be dogmatic.

That it was obviously true.

So I moved into a very long period where I called myself a Christian agnostic.

I didn’t mind this too much.

After all, who wants to believe something if it isn’t true?

Well, I’ve finally found out who.

I’ve had an experience twice now.

Trying to interact with eastern “thinkers.”

People who present ideas very contrary to what I think makes sense.

As I’ve read what these eastern thinkers think, I’ve seen reasons to question their whole belief system too.

Just like I did with my own Christian faith.

I’ve expressed these doubts to them.

Shown them the flaws I see in their reasoning.

Thinking this would lead to an intelligent conversation.

I thought we could discuss these ideas more thoroughly and try together to come to a mutual understanding.

Surely they want to know the truth?

Just as much as I do?

The exact opposite is the case.

As you can see there is common denominator here.

“You’re free to believe whatever you wish.”

This is of course consistent.

With what I’ve said about how these people think.

But I’m completely dumbfounded how to interact with them.

They simply have no desire to have their ideas questioned. Or to have to provide reasons for their “faith.”

Whatever they want to believe.

And think that’s all that’s required.

I’ve never encountered this before.

Never experienced a more self-insulating perspective in my life.

Anyone who questions that you are right is wrong.

You should “move away” from anyone who questions you.

Because you don’t need that “negative energy” in your life.

Anyone who asks about truth is being “confrontational” and should be avoided. You should live “your truth” and let everybody live theirs.

Nobody can question your truth.

Because it is true “for you.”

And what is true for you?

That’s totally guided by your feelings.

It changes as you change.

Nobody else can question what is true for you because only you can know. And when you know, you just know.

They can ever be wrong about anything.

Sadly they can never be right either.

Because right is based on truth.

As long as you don’t believe real truth exists, I’m afraid you are still quite lost.

I wish I knew how to find you…