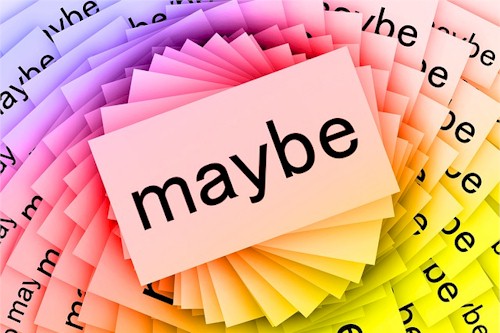 Having lived in the church for years, I know the perception many people have of it.

That it is filled with unintelligent bleeting sheep who just follow along blindly.

Believing because they were raised in it.

Not because they have actually examined their beliefs and decided why they believe what they do.

I joked many times through the years that there should be a sign outside the door of every Evangelical Christian church that says, “Please check brains here before entering.”

I’ve never been that kind of Christian.

In Grade 9 I began reading philosophy and thinking deeply about faith.

In High School I was trying to make my way through Immanuel Kant’s Critique of Pure Reason.

In Grade 10 social class I spent much of my time with my fellow students surrounding my desk.

They were grilling me with questions about Christianity while we were allegedly working on our social studies project!

By the time I was 19 years old I was pastoring a home church associated with the Calvary Chapel movement.

By age 24 I began a study that led me into about 15 years or so of agnosticism.

I was so honest about the basis of belief I was unwilling to affirm what I couldn’t affirm.

Those weren’t easy years. Non-commitment is not a happy place to be.

I could do no other.

I married and we had our kids during my agnostic period, so I raised a couple of skeptics.

Despite all this I never viewed myself as an “unbeliever.” I called myself a Christian Agnostic.

I meant two things by this admittedly oxymoronic term.

The first was that I leaned more toward there being a God than there not being one.

The second was that I felt of the theisms on offer, Christianity seemed the most intellectually plausible.

But I couldn’t see a way to argue this that didn’t leave open the opposite conclusion.

So I remained unsure.

Many of my Christian friends didn’t like this very much. My family members were concerned about me too.

And I never resented that.

It was hard to explain to my young sons why their Evangelical Christian cousins kept trying to “convert” them.

I told them when they did this, they were really acting in love.

Because they genuinely thought their cousins were lost and didn’t want them to go to hell.

I always welcomed prayers from my relatives and friends. I figured God was able to translate those into whatever was truly needed in my case.

Despite my agnosticism, I could still get “riled up” about God’s truth.

I remember one humorous Christmas visit at my brother’s place.

He was touting some theology that effectively justified the presence of sin in the life of a believer.

I got so offended for God’s honor and worked up about justifying his case against sin, I surprised my brother.

After this tremendously emotional display for the cause of righteousness, my brother asked me, “Aren’t you supposed to be agnostic?”

Obviously I wasn’t your typical doubter either.

But I couldn’t help myself.

I saw lots of evidence that God might indeed exist and that Christianity could indeed be true.

But I also could see that most arguments I could muster to “prove” this were inconclusive.

I was too atheist for the Christians and too Christian for the atheists.

It wasn’t until a couple years ago that my agnostic stance began to finally erode.

It was in the middle of a turn around in my relationship life.

I was not focused on theology or philosophy at all.

Suddenly my mind became fixated on the Emerging Church.

This movement shares post-modernism’s insistence that we cannot really know anything definitively.

My reasons are too complicated to get into here, but I always had my doubts about post-modernist doubts, since they are inherently self-contractory.

When my thoughts drifted back to this question, I remembered an obscure area of Christian epistemology called Presuppositionalism.

I had dismissed it many years prior.

Something told me now that it could hold the answers I sought.

A long lost manuscript by the late Greg Bahnsen has very recently been found and published under the title Presuppositional Apologetics: Stated and Defended.

Two years of study and wrestling over the concepts discussed in that book resulted in my first essay in many years.

It is called Epistemological Argument For God, and presents my answer to the post-modern dilemma.

As well as the answer to my agnosticism.

My presuppositional argument to my knowledge is unique to me.

It draws heavily on insights I read in Jean Paul Sartre’s Being And Nothingness just out of High School.

I expect eventually to expand further on this theme, extending it into the areas of moral theory and ontology/metaphisics as well.

Along with other things going on in my life, my discoveries of this time led to a sort of revival of my faith.

In addition to finding answers to long standing questions regarding whether belief in the Christian God is sound, I also started experiencing God in my life in significant and life changing ways.

So that is how I became a reformed Christian Agnostic!

I’ll have lots more to say on all of the above themes in future installments.

How To Believe Something You Don’t

Don’t Just Go With The Flow